How do you Date a Canal? 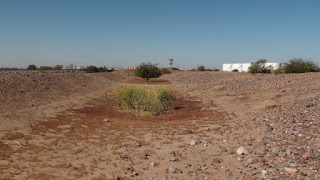 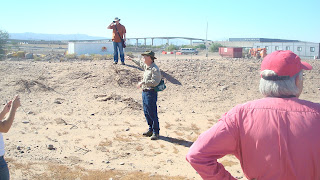 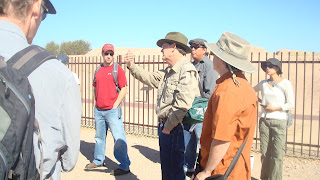 On Saturday, October 27, an interdisciplinary research team lead by Dr. David Abbott, ASU professor and Hohokam archaeologist, visited Pueblo Grande.  Dr. Abbott is well-known for his contributions to reconstructing prehistoric pottery production and trade activities through compositional analysis.  Dr. Jerry Howard, Curator of the Arizona Museum of Natural History and expert in prehistoric Hohokam irrigation practices provided a tour of the Park of Four Waters, where the remnants of two main canals associated with Canal System 2 are still visible.  Dr. Howard explained to the team that there is still so much that we don’t know about Hohokam canals and an important research emphasis right now is to obtain better chronological information.  He explained how optically stimulated luminescence (OSL) dating of quartz crystals within canal sediments is a good method of obtaining dates with a relatively high level of confidence.  We really don’t know how long it took for sedimentation to occur within the ancient canals or exactly how long they remained in use.  Current evidence indicates that the typical life span of a canal may have only been 50 to 100 years.  OSL dating can help us to explore this further.  Also, evidence from more recent investigations indicates that new canals were being constructed all the time and that possibly canal maintenance was sometimes more difficult than canal building.  More and better dates will help to test this hypothesis.

If you are interested in seeing the Park of Four Waters for yourself, we offers tours at 10 a.m. on the last Friday of every month.  Tours are free with paid Museum admission but space is limited and on a first come, first serve basis.  Visit our Calendar of Events for upcoming tours.